The exhibition HEROINES - Romanian and Czech women from the past and present, in preparation at the Transylvanian Museum of Ethnography, will be focused on the personality of Doina Cornea 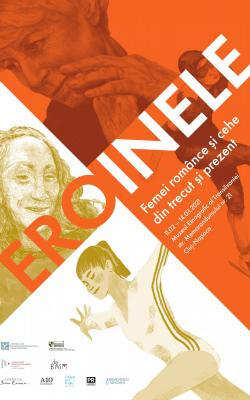 For technical reasons, the exhibition could be visited started with Friday, February 11, 2021, starting with 16. Thanks for understanding!

The Transylvanian Museum of Ethnography, a public cultural institution functioning under the authority of the Cluj County Council, invites you to the exhibition Heroines - Romanian and Czech Women from the past and present.

HEROINES - Romanian and Czech women from the past and present is an exhibition dedicated to the courage, commitment and perseverance of all women who fought for their rights, for freedom, equality and democracy. Organized by the Czech Centre Bucharest, the “Doina Cornea” Foundation and the Transylvanian Museum of Ethnography, along with their partners, the exhibition brings together illustrated portraits of prominent female figures of the Czech Republic and Romania, accompanied by short stories of their impressive lives.

The exhibition will be opened in Cluj from February 11th, at the Transylvanian Museum of Ethnography, and it will be focused on the exceptional personality of Doina Cornea (1929-2018), an authentic heroine of the anti-communist resistance and a true moral landmark in the difficult years of Romania’s transition to democracy.

In the 1980’s, Doina Cornea was one of the very few opponents of Nicolae Ceaușescu’s destructive policies. In 1982, Doina Cornea wrote her first letter of protest against the Romanian communist regime, which she sent to Free Europe Radio (Radio Europa Liberă). The dissemination of her letter’s content resulted in her dismissal from her teaching position in 1983. During 1983-1989, she was subjected to frequent investigations, interrogations, threats and persecutions. On November 17, 1989, Doina Cornea received the title of Doctor Honoris Causa from the Free University of Brussels, an international acknowledgement of her abnegation, dignity and full courage in the fight for human rights and against totalitarianism in Romania.

After the events of December 1989, Doina Cornea was co-opted into the National Council of the National Salvation Front from which she resigned at the beginning of 1990. She was a founding member of the Social Dialogue Group, the Democratic Anti-Totalitarian Forum in Romania, the Association for Human Rights Defense – Cluj branch, the Civic Alliance, the “Memoria” Cultural Foundation. Doina Cornea carried out a sustained activity for the democratization of Romania and the consolidation of the rule of law. She passed away on May 4, 2018 in Cluj-Napoca and she was buried with military honors in the Central Cemetery of Cluj.

The exhibition HEROINES - Romanian and Czech women from the past and present is organized by the CZECH CENTRE BUCHAREST (with partners: DeBasm – The Association of Romanian Writers for Children and Teenagers and the Faculty of Design and Arts “Ladislav Sutnar”), THE “DOINA CORNEA” FOUNDATION (with partners: Artmark, Create.Act.Enjoy, PR&MORE, Iordăchescu&Associates) and THE TRANSYLVANIAN MUSEUM OF ETHNOGRAPHY.

During the exhibition, the “Doina Cornea” Foundation and its partners will organize a series of events dedicated to the memory of “Doina Cornea”, with the participation of distinguished cultural personalities. The programme will also include visits of the “Doina Cornea” Memorial House, a landmark for the recent history of the struggle for democracy and human rights.

The exhibition will be visited in accordance with the norms for preventing the spread of Covid-19. A limited number of people will have access to the Reduta room at the same time, the protective mask is mandatory, and access is only made after taking the temperature.