Innovative exhibition – The Church of Horea 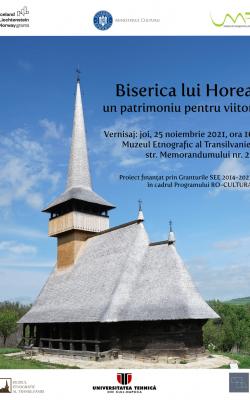 The innovative exhibition illustrates the result of the interaction between digital technologies and the classic exhibition of cultural goods, the two exhibition plans combining each other in a new context and an immersive perspective. The exhibition’s attraction point is represented by the transposition into VR (virtual reality) of an ethnographic, historical and architectonic monument representative for the national cultural heritage, namely the church from the village of Cizer, built by Horea and his team of carpenters from “the Stone Land”, in 1773, together with the movable patrimony goods from this church, donated to the museum by the Diocese of Vad, Feleac and Cluj in 1966. The movable cultural goods, the carpenter’s tools and the detailed images of the church painting, to which is added a section dedicated to Horea’s personality, are combined into a relevant exhibition per se, which aims at describing the history of a monument and that of the community to which it belonged. The real exhibition is harmoniously completed with the spectacular component made through virtual reality, due to which the complete scanning of the church’s outside and inside was fulfilled.

The visit of the exhibition can be done between November 25, 2021 - February 28, 2022, from Wednesday - Sunday, 10 a.m. - 6 p.m., with the last entry at 5 p.m., in compliance with the rules especially issued for the alert state caused by the COVID-19 pandemic, the period, schedule and visiting rules may be modified in accordance with the incidental normative acts.