THE LAND OF NĂSĂUD. TRADITION AND INSPIRATION: THE “VIRGINIA LINUL” COLLECTION 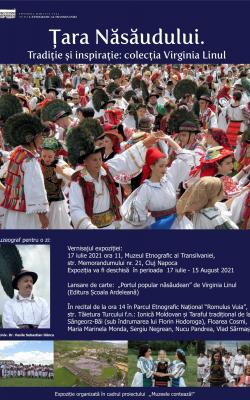 The Transylvanian Museum of Ethnography, public cultural institution functioning under the authority of the Cluj County Council, invites you on Saturday, July 17, 2021, at 11:00 a.m., to the opening of the exhibition “The Land of Năsăud. Tradition and inspiration: the  Virginia Linul collection”.

Organized within the project "Museums matter!", the exhibition has been made with the direct involvement of prof. Vasile Sebastian Dâncu, as "museographer for a day".

***
Virginia Linul has dedicated herself, for over two decades, to the preservation and revitalization of a remarkable cultural heritage of the Land of Năsăud: its spectacular clothing tradition. In 2020, Virginia Linul opened, at Salva House of the Traditional Folk Costume - Virginia Linul, a personally conceived and made project, based on the experience gained in the field throughout the years. The exhibition opened at the Transylvanian Museum of Ethnography presents a significant selection of folk costumes from the Land of Năsăud, along with personal creations made in collaboration with international partners.

“Museums matter!” is a proiect of the National Network of Museums in Romania, aiming to give Romanian decision makers a better understanding of the museum activities and to convince politicians that museums have not only cultural and educational values, but also significant social and economic ones for the society. The project has been inspired by the international experience in the field. Since 2018, the Network of European Museum Organizations (NEMO) has been organizing museum internships for European politicians, taking over the previously successfully applied models in the Netherlands and Finland. In its turn, the American Alliance of Museums (AAM) annually organizes Museums Advocacy Day, with the participation of congressmen from the Senate and the House of Representatives.

In Romania, four one-day practice sessions are organized within the project "Museums matter!", in museums from Bucharest, Cluj-Napoca, Iași and Zalău, for four important representatives from the Romanian political environment, with influence and activity in the cultural sector.

In this context, the Transylvanian Museum of Ethnography has the privilege to collaborate with the sociologist Vasile Sebastian Dâncu, a member of the Culture Commission of the Romanian Senate.

Professor at the Faculty of Sociology of the University of Bucharest, member of the European Society for Opinion and Marketing Research (ESOMAR) and of the Association of Romanian Sociologists, Vasile Sebastian Dâncu has had a prodigious political activity, holding, among others, the positions of Minister of Public Information (2000-2003), President of the Agency for Governmental Strategies (2003-2004), Deputy Prime Minister and Minister of Development, Public Works and Administration (2015-2017).

A native of Runcu Salvei (Bistrița-Năsăud county, Transylvania), Vasile Sebastian Dâncu is a passionate promoter of the traditions from the Land of Năsăud and of their revitalization projects, which can be role models for rural communities in all regions of Romania.

We look forward to welcoming you!