“WORDS AND THINGS”. THE DRAWINGS OF THE CORRESPONDENTS TO THE INDIRECT LINGUISTIC SURVEYS OF THE ROMANIAN LANGUAGE MUSEUM 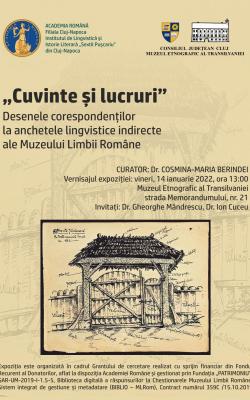 EXHIBITION EVENT AT THE TRANSYLVANIAN MUSEUM OF ETHNOGRAPHY ORGANIZED ON THE OCCASION OF THE NATIONAL CULTURE DAY 2022.

The Transylvanian Museum of Ethnography, public cultural institution operating under the authority of the Cluj County Council, invites you on Friday, January 14th 2022, at 1 pm, to the opening of the exhibition “Words and Things”. The drawings of the correspondents to the indirect linguistic surveys of the Romanian Language Museum, opened on the occasion of the National Culture Day 2022.

Exhibition title: “Words and Things”. Drawings of the correspondents to the indirect linguistic surveys of the Romanian Language Museum.

The “Sextil Pușcariu” Institute of Linguistics and Literary History, the Romanian Academy – the Cluj-Napoca Branch

The Transylvanian Museum of Ethnography, Cluj-Napoca

The Transylvanian Museum of Ethnography, 21, Memorandum Street, the Reduta Hall

Tributary to the “Wörter und Sachen” methodology, manifested at the beginning of the 20th  century, especially in German philology and which argued that the study of words, in order to establish their etymology and history, had to be done in close connection with the study of artefacts and all the cultural aspects they were part of, Sextil Pușcariu encouraged the correspondents participating in the Museum’s surveys to illustrate their answers, offering not only linguistic information, but also drawings, when their artistic skills would allow it. Thus, the survey notebooks brought together graphic representations of the thematic universe of the questionnaires, offering ethnographic evidence from the beginning of the 20th century, unique in their genuine expressiveness.

The exhibition is organized within the Research Grant made with financial support from the Recurrent Donor Fund, available for the Romanian Academy and managed by the “PATRIMONIU” Foundation GAR-UM-2019-I-1.5-5, the Digital Library of Answers to the Romanian Language Museum Questionnaires. Integrated management and metadata system (BIBLIO - MLRom), Contract number 359C / 15.10.2019.