THE ARTEFACT OF FEBRUARY: THE HUCKABACK TOWEL 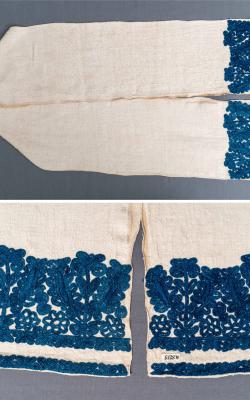 The huckaback towel from the image we propose, having inventory no. N8279, was purchased in 1959 and it is a godfather’s towel. It was loom-woven, in two threads, with hemp netting and woof, with motifs embroidered on the drawing on both ends, in the “írásos” technique (emblematic technique for the Hungarian area of Călata). The decoration with blue cotton thread consists of two narrow borders, disposed in parallel with the edge of the huckaback towel, having a symmetrical, frontly disposed ornament, composed of floral motifs. Perpendicular to the second border/frieze, there is an ample, wide decoration, composed of two phytomorphic motifs based on four inserted stylized flowers.