THE ARTEFACT OF JUNE: “IA” (THE ROMANIAN TRADITIONAL BLOUSE) 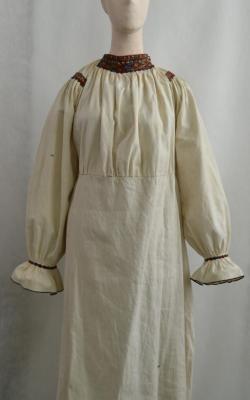 Since the Universal Day of the Romanian Traditional Blouse (“Ia”) is unofficially celebrated (but perhaps more fastuously) on Midsummer Day (“Sânziene”), the artefact of June at the Transylvanian Museum of Ethnography is an “ie” from central Romania. Not any Romanian traditional blouse was named “ie”, this term being used in Wallachia and southern Transylvania; in other regions, the same piece of feminine garment was also named “inie”, “spăcel”, “spătoi”, “chimeșă”, “cămeșoi”, “ciupag”, “cept”, etc.

In terms of composition, “ia” is distinguished by the tripartite structure of the sleeve formed by “altiță” (wide embroidery on shoulders), “încreț” (wrinkle) and “râuri” (rivers). The wide embroidery is a piece of separately cut cloth which covers the shoulders and to which the sleeve is attached. This is embroidered starting from the bottom, the decoration consisting of one or several narrow rows. The wrinkle, as the name suggests, has the role of "wrinkling" the cloth of the sleeve at its meeting point with the wide embroidery. In older pieces of garment from southern Transylvania, it is made of simple plies, sometimes embroidered on the edges; in southern Romania, it developed towards elaborate shapes, in which the volumetric play generates geometric shapes. The rest of the sleeve is decorated with one or more "rivers", or with large sections of embroidery ("tabular" or "fur"). There are also cases in which the embroidery is missing, especially in the case of raw silk sleeves. The sleeves of the Romanian traditional blouses are never shorter than the hand. In the case of romanian traditional blouses from southern Transylvania, due to the narrower embroidered surfaces, they are considered to be undeveloped as compared to the spectacular Wallachian blouses. However, they are distinguished by the extremely fine, "tiny", and highly refined seams.

The displayed traditional blouse has been part of the patrimony of the Transylvanian Museum of Ethnography since 1928 and it was purchased from the village of Săsăuș, Hârtibaci area, Sibiu county.