The Artefact of May: The Prosphora Seal (“prescurnicer”) 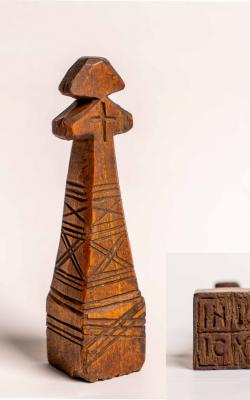 Our proposal for the “month artefact”, month which started this year with the Easter Holidays of Orthodox and Greek-Catholic rite, the prosphora seal bears the “Jesus Christ, the Overcomer” or “Jesus Christ overcomes” message in the IC XC NI KA inlaid signs.

Known under several names - “prescurar”, “pristolnic”, “pistornic”, “pecetar” – the prosphora seal (“prescurnicer”) is a cult object, usually made of wood (it can also be made of stone or clay) used to inscribe the prosphoras.

Small, handcrafted objects, prosphora seals are most often carved in the shape of a cross, simple or with different stylizations, with a quadrilateral base on which the sacred words IC XC NI KA are inscribed and which are imprinted on the prosphora.

Prosphora is a small and round loaf of bread made of raised dough, mashed of white wheat flour. Along with wine and water, this liturgical bread is the main material for the preparation of the Holy Communion.

The use of prosphora seals, the preparation and baking of bread were attributed only to old women in the village or to sisters in monasteries. Prosphora seals were kept in the house in an honorable place, next to icons or in the dowry box. Made by craftsmen or in the household, these objects prove, through their decoration, the concern for beauty and the skills of those who made them.

The prosphora seal in the image shows, on the upper side, the incised cross motif as a decorative element. On the facets which continue the slender body of the hardwood object in the shape of a pyramid trunk, there are identically incised horizontal deep lines, which include between them very simple decorative motifs in the shape of X. The decoration connects the four facets of the ritual object and it is restricted to the lower side on the inlaid pedestal.

The prosphora seal with inv. no. 9758 is 14-cm high, with a base of 33x33 mm, it comes from Sighetul Marmației, Maramureș county and it entered the patrimony of the Transylvanian Museum of Ethnography in 1954.