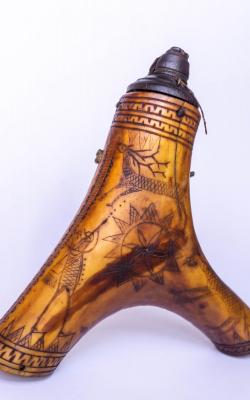 Considering the fact that we are in full hunting season, the Transylvanian Museum of Ethnography proposes to you, as artefact of October, the antler gunpowder case, an indispensable object in practising hunting with fire arms at a time when this type of weapons was not yet perfected.

Unlike other types of horns (for eg: cattle horn which was mainly used to make various tools present in households), the deer horn was used to make gunpowder cases used by hunters (especially in mountain areas and in border guard areas). In addition to their practical function, these cases also represented a symbol of the owner’s social status, being also considered real hunting trophies.

The gunpowder case in the attached image (inventory no.: N7364) is made of deer antler (cervus elaphus). It has a height of 20 cm and a width of 18 cm, being manufactured by shaping, pecking in the inside and stone polishing on the outside. The shape of the horn with three branches (“neck”, “chest” and two “legs”) has a bone cover applied to both “legs”, and a wooden cover on the “neck”, the latter having a hole for pouring gunpowder. The horn decoration, naively manufactured, presents a hunting scene. As a central motif, we have the rosette with six spokes (solar motif), and various geometric motifs on the extremes. Two iron shackles are added to the neck, to which a leather belt was tied to be carried on the shoulder. The representation of the hunting scene is not accidental, as it proves that the primary purpose of this drawing, according to ancient beliefs, was to “attract” the chase and to fulfill the hunting scene, as it was represented on the gunpowder case. At the same time, the solar symbol represented by the rosette (an archaic magical sign) was meant to protect from rain and to prevent water from infiltrating inside the gunpowder case.

The antler gunpowder case, originating from Hunedoara county, is part of the patrimony of the Transylvanian Museum of Ethnography in Cluj-Napoca since 1959.