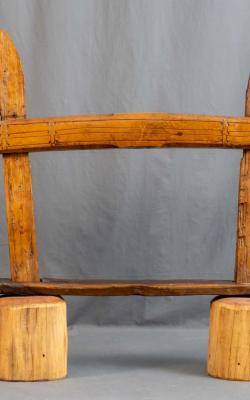 In the development of human society, the use of domestic animals’ tractive force was vital both for tillage and transport, remaining important even after motorized traction.

Throughout time, archaic technical solutions were passed on from one generation to another. Among these, we find tools and technical ensembles by which peasants were plowing the land, preparing it for seeding (the plow) or for transporting the products of their labor (the cart). A common piece of the two technical ensembles is the yoke (jugul), the piece that transfers the driving force from the animal to the entire plow or cart ensemble.

In the Romanian rural area, the most widespread forms of yoke are the double ones (for yoking two animals), but the one-place form was also encountered (the simple yoke). Mostly oxen or buffaloes were yoked, animals known for their high tractive force. Manufactured either by the animals’ owners or the village cartwrights, yokes were made of light hardwood.

Such a yoke is the one in the image, belonging to the MET collection (inventory no. 217) which, as a typology, is part of the neck yokes category, widespread throughout Eastern Europe and the Balkans. The yoke (the entire ensemble) is entirely made of wood. It has got two pieces which take up the animal power, and other pieces which strengthen the structure and limit the animal’s escape from the yoke. The first two pieces are arranged in parallel with the ground and they hold the animal’s neck between them: one up, the yoke itself (“căpătâiu”, “dublău”), and one down (“policioara”). The yoke itself is made of a thicker wood, 150 cm long, faceted on four sides, it is made of three parts, and two of these parts have a semicircular shape, being adapted to the neck shape of the tractive animal. “Policioara” is a board placed on the wider side (9 cm). Through the holes of these two pieces, there are inserted: (a) “bolfeie”, two wider planks, inserted in the inner edge of the semicircular part of the yoke, aimed at strongly consolidating the entire structure and at keeping animals at a proper distance for movement (they are attached to the yoke by wooden nails); (b) “resteie”, parts made of hazelnut branches or horn, which have a natural curved shape, on the upper end, to prevent slipping through the hole in which they are inserted, and thus to retain the animal’s neck. The yoke is decorated on its visible parts (front, back, top) with inlaid geometrical motifs (lines, rectangles, lines with wolf teeth), placed in fields which follow the piece shape. Most likely, the aesthetic decoration role is doubled by its magical apotropaic meanings. In its middle, the yoke is drilled in order to insert “ciogâlteu”, which is an iron nail attaching the yoke to the rood that leads to the active part of the entire ensemble (plow/wheeled platform of the cart).

In the peasant world, the use of this object did not stop at daily work practice but, based on its practical functions, the yoke was used as an object with symbolic meanings in the ritual-ceremonial oral literature and peasant proverbs.