The artefact of April: the shepherd’s stick 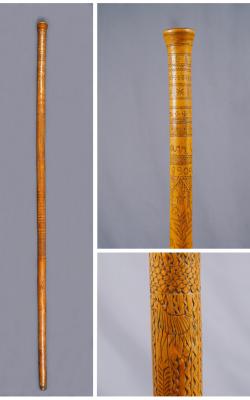 April (in Latin – aprilis, from the Latin word “aperio, -ire” = to open), the 4th month of the year, traditionally named “prier”, is the period in which spring enters its rights, the plants sprout, at the same time, marking the beginning of the pastoral season, a period when the animal herds are formed, when the sheep gathering (milk measurement) takes place. As an object of the month, we propose: THE SHEPHERD’S STICK.

The stick used by the shepherds had a multifunctional role: in directing the herds; as a support for possessors when climbing up various slopes or crossing watercourses; as a prop for moments of rest; as a defence weapon against wildlife. The stick was also a professional insignia, being made by shepherds themselves, having a straight shape, with two options: simple and with a cudgel, on one end. These two types of pastoral sticks are typically Romanian.

The stick in the image (inventory no: 6886) is made of carved hazelnut wood, cylindrical in shape, with a flattened cudgel on one end. On two thirds of the surface, the stick is decorated (scattered) with geometric motifs (“X”s, rosettes, rhombuses, wolf teeth, circles, zig-zags, hachures, triangles), phytomorphic motifs (leaves), floral motifs (flowers placed in pots), zoomorphic motifs (ram or goat) carved in a naive manner. In the upper part, there is also engraved an inscription with “Indolean Iiuon * 1909” - the name of the owner and the year of its manufacture.

The stick, purchased from Apahida, Cluj county, entered the patrimony of the Transylvanian Museum of Ethnography in Cluj-Napoca, in 1924.