The artefact of May: the ewe-cheese mold 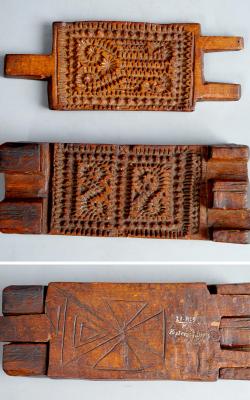 The ewe-cheese mold – our proposal for the artefact of May – was used at the end of the 19th – the beginning of the 20th century in the Romanian pastoral environment from Bran and Vrancea ethnographic areas. The piece consists of two overlapping wooden boards. Both inner sides are decorated on the whole surface. Due to the anthropomorphic shape of the lid, the mold has the traditional name of “puppeteer for making ewe-cheese”.

With the help of puppeteers, the lads from the sheepfold made ewe-cheese dolls. They were small bars of fresh ewe-cheese, later blanched, kneaded and pressed according to the mold’s shape and decoration. In many cases, mainly in the Bran area, the decorated ewe-cheese was smoked, receiving a golden-brown shade which highlighted the relief on both sides of the ewe-cheese bar.

When coming down from the mountains, at the end of summer, the young shepherds would bring ewe-cheese puppets as “love gifts” for the girls they were courting.

The social function of the ewe-cheese mold explains its rich decoration, made in relief. The inner motives (heart, spiral) suggest the endurance of young people’s feelings in time; on the exterior, the religious motif (the cross) symbolizes the confession of the Christian faith.

The ewe-cheese mold in the image (with inventory no. 3364), purchased from Peștera village, Brașov county, entered the patrimony of the Transylvanian Museum of Ethnography in Cluj-Napoca in 1929, and it is in the museum’s basic exhibition.